Inside the armv1 Read Bus

Having explored the Register Bank last time, a good next step is to explore where its two read port outputs go. In this blog we'll start with Read Bus B, as that will also lead us the Data Bus and the data line pins. As a reminder from my earlier blogs, the floorplan is in the following diagram although, as we will see, there are several detailed differences in the actual chip. Also remember, as pointed out in the last blog, this diagram incorrectly swaps the read bus A and read bus B. 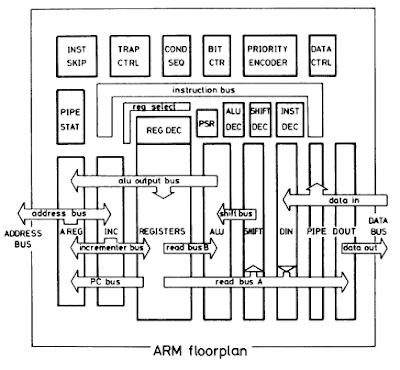 This exploration will end up covering a lot of ground - we'll find the Instruction Register and the instruction bus that feeds off it, and how data is routed in and out of the chip via the data bus. The diagram below highlights the areas of the chip we'll end up exploring. 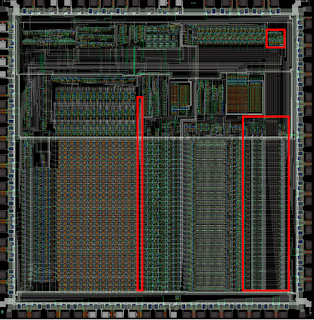 To help navigate our way around the more complex logic, I've labelled the different areas in a zoomed in area of the top of the larger rectangle. 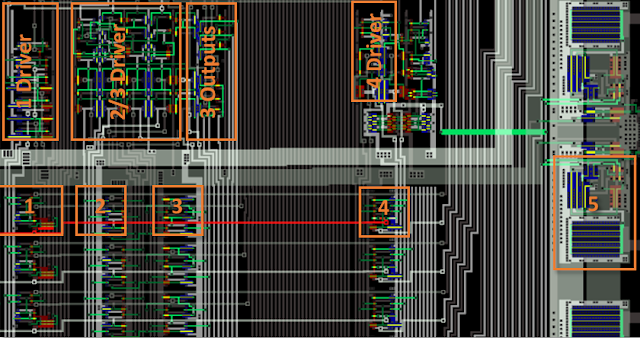 We'll start by following where bit 0 of Read Bus B leads us, and then see how the remaining bits of the bus differ. 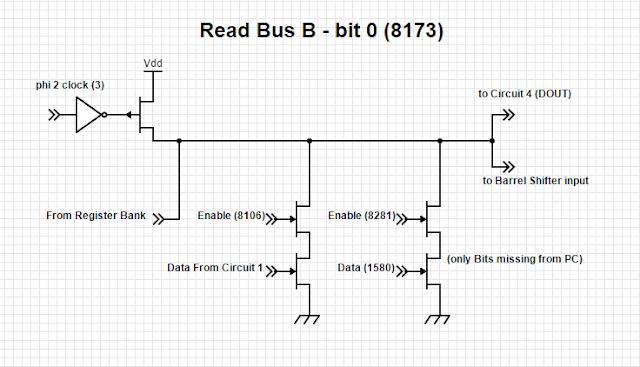 This circuit relies on stray capacitance on the bus line for its operation. During the second half of every clock cycle (when phi 2 is high) the FET in the above circuit pulls the bus line high, charging it to a high state. In the subsequent first half of the next cycle, one of three possible signals may pull the bus line low, discharging any stray capacitance. The state of the bus line is then read by either the Barrel Shifter or by Circuit 4, which processes the Data Out signal. The signal on the Read Bus is inverted logic - 0v represents a logical 1.

The signal input to the bus is one of the following:
Complexity arises with how the circuit differs for each bit. We've already dealt with how input 3 varies. However the enable (8106) for the data from Circuit 1 also varies in a complex way. There are 5 (!) enable lines across all 32 bits of Read Bus A:

One use of this circuitry is for when a byte-read takes place - the 8 bits of data just read appear on different bit ranges depending on the lower two address bits. The enable signals above allow the valid data to put onto the Read Bus (the barrel shifter then rotates the bits to the correct position). I don't yet understand why the second and third enable signals drive just 4 bits each. The circuitry to create these 5x enable signals is in the DATA CTL area - the red rectangle at the top right of the chip: 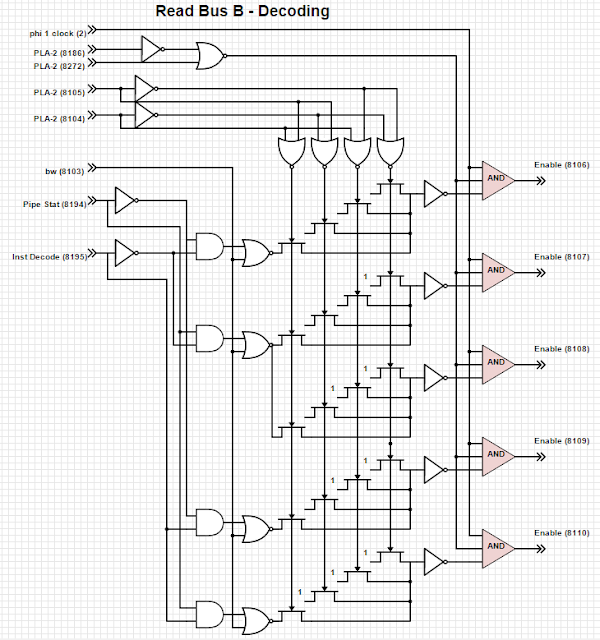 As can be seen from the diagram, each enable output is dependent on the result of a 4:1 multiplexer. Each multiplexer has 3 of its 4 inputs that are hardwired to either a 0 or 1. The fourth multiplexer input is dependent on additional logic, including the bw output pin. The bw output pin indicates whether the current memory read/write operation is for a byte transfer or a 32 bit word transfer (high for word, low for byte). The truth table below is another way to see the operation.

The top three rows demonstrate that the first three inputs (phi 1 clock, 8186, and 8272) must have values 1, 1, 0 respectively for there to be any output. The next three lines show the outputs for three of the possible permutations of 8105, 8104. I suspect that these are for instruction decoding:

Circuit 1 - Data In and I-Reg Multiplexing

Now that we have the circuit for the enable signal for Circuit 1 let's look at Circuit 1's internal logic, and its associated driver circuit. 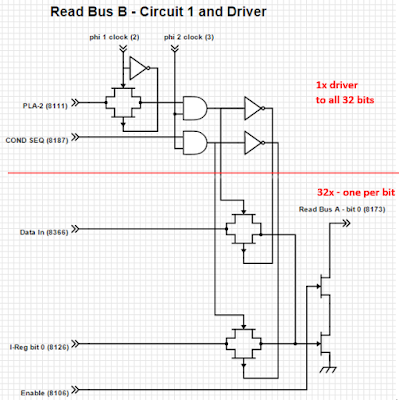 So this circuit puts either Data In or I-Reg onto Read Bus B, depending on two control signal from elsewhere - signal 8111 or 8187.

The back-coupled FETs that signal 8111 feeds into warrants a little more discussion. This back-coupled FET pattern is used in many places throughout the processor, including in the ALU. This pattern appears to have two distinct uses:

The Instruction -Register logic is as follows: 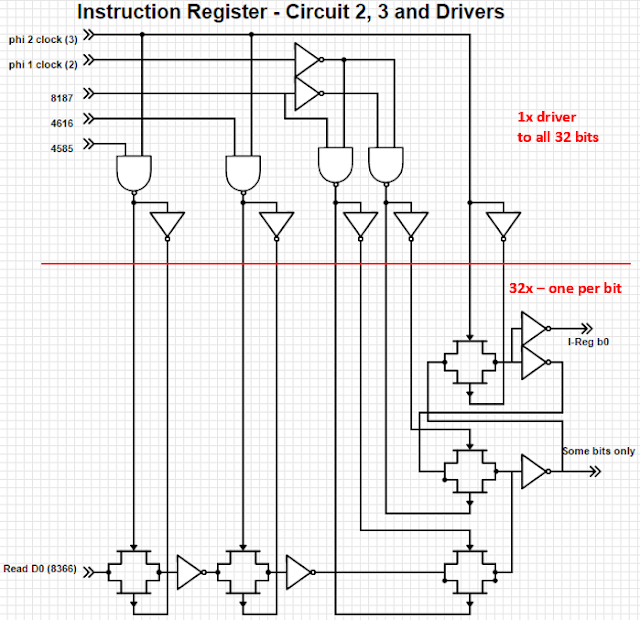 The Instruction Register itself is the cross-coupled inverter on the right, although it's difficult to see with the FET multiplexers at each inverter's input. The pair of multiplexers that feed the lower cross-coupled inverter determine whether the register maintains its current (looped back) state or whether it is updated from a delayed copy of Read D0. Input 8187 selects which multiplexer is selected. The 3x input signals that control this circuit will be explored subsequently, but a quick look shows that input 4585 is derived from the opc pin, which indicates that the processor is fetching an instruction, so we're definitely on the right track!

The I-Reg outputs form a bus that runs right across the chip, pretty much as illustrated in the floorplan at the beginning of this blog. However, there are a few exceptions:

The final circuit connected to Read Bus A is the Data Out (DOUT) processing logic which in the area marked as "4" in the earlier image: 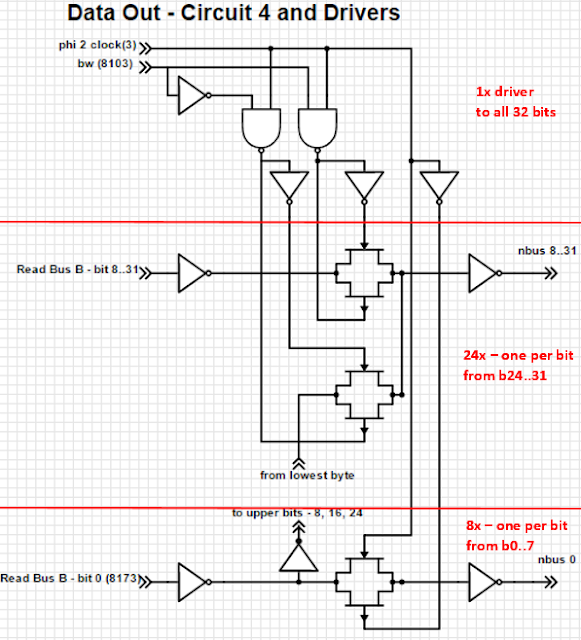 This logic interfaces the Read Bus with the processor's data bus. Normally all 32 bits of the Read Bus are presented to the data pins; however during a byte-write, the data in the lowest byte is also presented on 3 the upper bytes too.

The logic for the 8 lowest bits is the identical, and passes the signal to the other bits via an 8-bit wide bus, and also towards the Read/Write pin on nbus signals.

The logic for bits 8-31 is also identical. The signal is multiplexed in from either the Read Bus B input or from the 8-bit wide bus fed by bits 0..7. The bw (byte not word) input signal selects between the two inputs. We've already encountered the bw input signal in the Read Bus B decoding logic.

The final circuit to explore is associated with each data line, and is highlighted in the diagram above as circuit 5. 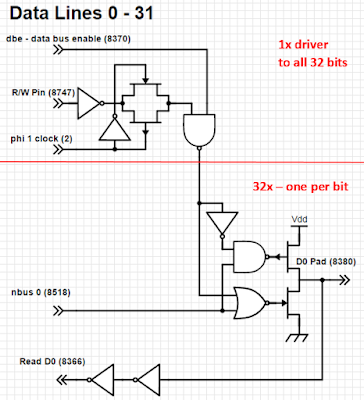 We also see the R/W pin, and the dbe (data bus enable) pin having a part to play in the logic.

We have finally completed our exploration of the Read Bus B logic, and in the process identified the Instruction Register (I-Reg) and how data is read and written to the data pads. We've also seen some of the complexities of dealing with byte/word reads and writes and how reading r15 (the PC) is a special case. Around 2,200 transistors are used to implement these circuits.

To have located the Instruction Register is an important step forward as it is its content that drives much of the processor's control logic. But all that is for future blog posts.

But let's not get lost in the details. Overall, the circuitry described in this post accomplishes some simple routing, which are summarised in the diagram below, which is a little more explicit than the floorplan diagram above. Yes, there are extra details that aren't shown in the diagram, but it helps to keep this overview in mind too. 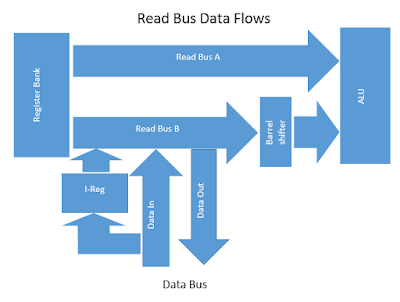